In my review of Blackout, the first book in this duology, I said that:

Blackout is a near-future dystopian story with a very British feel. I don’t read a lot of dystopian books — or at least I don’t usually search it out? — but I absolutely loved Blackout…

Sparks has that same gritty, underdog feel but expands the world outwards, adding in international locations and high-tech allies.

Mallory does a great job of building on the believable dystopian near-future established in Blackout. As I’m not a huge dystopian reader, there’s just enough genre aspects here to interest me, without feeling too overwhelming or confusing.

As in the last book, Skyler, Angel, and Mack completely won my heart. There’s also a few new characters both fighting with and against our heroes. You know that the author’s really captured complex, well-rounded and likable characters when I find myself muttering “my baaaabies…” at my Kindle.

I really loved the way Sparks has unrepentantly queer characters (and that it’s not something that’s made a big deal of in this future) and the way it looks at both PTSD, anxiety, and OCD. I’m not an ownvoices reviewer for mental health so I can’t comment on the way it’s handled, but it felt believable and handled with respect. The characters are so wonderful and messy, and completely heart-warming.

The plot is fast-paced with plenty of action, assassination, and theft, but there’s still plenty of time to let the characters breathe and the relationships develop. In terms of action, this was everything I could have wanted from the Blackout sequel. It adds even more danger, new threats, a big international agency (which of course, we don’t know if our heroes can trust) and globe-trotting missions.

Sparks (and the Blackout duology in general) is a fantastic dystopian novel. Having such strong characters makes this the perfect book if, like me, you’re just dipping your toe into the genre, while. For fans of dystopian stories, the tone and heart of this story make it stand out from the crowd. 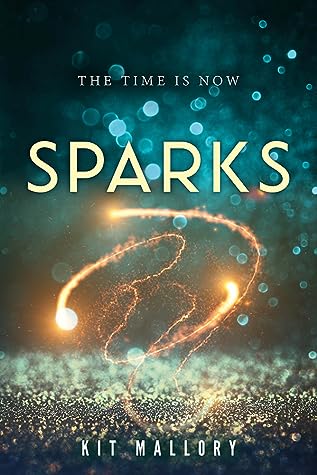 It’s 2034 and the United Kingdom is no more. Now there is only North and South, and the vast concrete Wall that separates the two.

A group of misfit outcasts have saved the North from annihilation – and started an unwinnable war with the brutal, totalitarian Board. Two months later, as the future grows ever bleaker, a mysterious international agency offers a final glimmer of hope.

But the Agency may not be all it seems, and the gang are still reeling from the fallout of their original mission as they wrestle with old demons and fraying loyalties. Plus there’s still the small matter of having a government to overthrow…

It turns out starting the fight is one thing. Finishing it is a whole different story.