WHEN WE WERE MAGIC

When We Were Magic has one of the most explosive, most darkly funny openings I’ve ever read. You definitely can’t say that Gailey doesn’t know how to throw you straight into the action.

The book follows Alexis and her five closest friends as they deal with the fallout from a little accidental magical murder. The number of main characters — plus Alex’s dads and brother, plus a handful of side characters — meant that it look me a little while to initially get a handle on each of the girls. Gailey does really well though, and each character has a distinctly memorable character early on. The girls are such an amazing, perfect friend group — with different dynamics between the different girls — you’d definitely want to have hung out with them in high school. Alexis also has the sweetest, most wholesome family ever: her little brother, Nico, and her dads are absolutely adorable.

The characters and characterisation in When We Were Magic was absolutely steller.

I loved the witchy side of the story too. I definitely got The Craft vibes from it, but without the bitchy, girl-against-girl aspect. In When We Were Magic we get girls supporting each other, working together and looking out for each other. The girls can work together with their powers — as they do at the start of the story — but each girl has her own, specific and distinct speciality e.g. Alexis can talk to animals. What’s really cool is that the powers are really unusual, not just the usual superpower tropes.

The only — tiny — issue I had with the book was the way the gang treat another girl who starts sticking her nose into Josh’s disappearance. The treatment of her — which felt like bullying — honestly felt cruel in a way that murder didn’t. 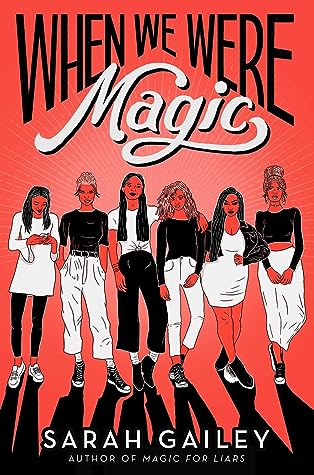 Keeping your magic a secret is hard. Being in love with your best friend is harder.

Alexis has always been able to rely on two things: her best friends, and the magic powers they all share. Their secret is what brought them together, and their love for each other is unshakeable—even when that love is complicated. Complicated by problems like jealousy, or insecurity, or lust. Or love.

That unshakeable, complicated love is one of the only things that doesn’t change on prom night.

When accidental magic goes sideways and a boy winds up dead, Alexis and her friends come together to try to right a terrible wrong. Their first attempt fails—and their second attempt fails even harder. Left with the remains of their failed spells and more consequences than anyone could have predicted, each of them must find a way to live with their part of the story.

Confessions of a YA Reader

6 thoughts on “ARC Review: When We Were Magic”