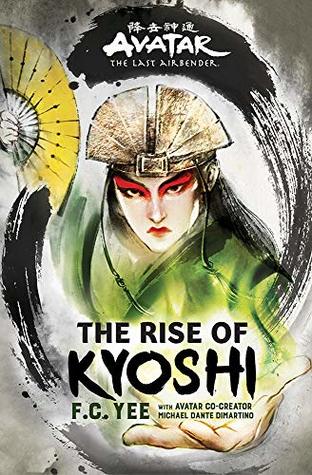 F. C. Yee’s The Rise of Kyoshi delves into the story of Kyoshi, the Earth Kingdom–born Avatar. The longest-living Avatar in this beloved world’s history, Kyoshi established the brave and respected Kyoshi Warriors, but also founded the secretive Dai Li, which led to the corruption, decline, and fall of her own nation. The first of two novels based on Kyoshi, The Rise of Kyoshi maps her journey from a girl of humble origins to the merciless pursuer of justice who is still feared and admired centuries after she became the Avatar.

First up, complete disclosure: I really like the Avatar: The Last Airbender TV series. However, I’ve only seen it once, my memory is awful and I’ve seen none of The Legend of Korra. So, while I have some background knowledge about the Avatar world I’m by no means an expert.

I think The Rise of Kyoshi is a great book either way. It doesn’t assume knowledge of the TV show, but at the same time, it doesn’t beleaguer the points in rebuilding facts the fans of the show are already well aware of. Because of that, I think it’s going to be brilliant for fans and newcomers alike.

The Rise of Kyoshi is so good!

It’s darker than the TV show. I felt it was very firmly in the YA camp rather than a lower YA or an upper middle-grade. Kyoshi’s a complex character but I loved her journey. There’s a lot of loss and a lot of trials which impact the way she sees the world around her.

There are also some amazing relationships both positive and negative. The found family dynamic that builds between Kyoshi and the Flying Opera Company was wonderful, the initial dynamic in Jianzhu’s house was fascinating and the friends-to-romance was beautifully done.

The Rise of Kyoshi moves quickly: it’s fast-paced with, lots of plot and adventure. I thought Yee did a really good job of balancing the character development and emotional moments with the drive of the plot and worldbuilding.

A great addition to the Avatar universe and a great story in its own right. can’t wait for the sequel.

2 thoughts on “Review: The Rise of Kyoshi”