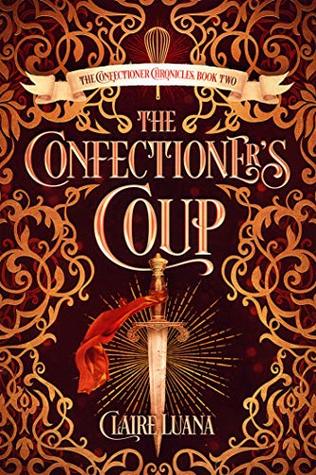 “I know you’re tough,” Lucas said, taking her hands. “But I won’t be able to focus if I’m worrying about how close you are, about what would happen if they got through.”

Out of the frying pan, into the fire…

Wren thought things were bad when her boyfriend’s father tried to frame her for murder. But that was before a hostile army showed up at the city gates, ready to swallow Maradis whole. And before guild members began disappearing one by one–including the Confectioner’s Guild’s newest Gifted recruit.

Wren, suspecting the king is to blame for the disappearances, undertakes a dangerous investigation that sets her on a collision course with old and new enemies alike. Will she be able to find the missing guild members before tensions boil over into outright rebellion? Or are the guilds willing to go further than she ever realized to rid themselves of the king’s tyranny…

23rd – 29th – How do you choose the next book to read? (submitted by Elizabeth @ Silver’s Reviews)

Usually I’ve got at least one readathon on the go, so I pick something off my TBR for that. Occasionally I just pick what appeals to me in the moment.