My reviews of The Extinction Trials and Rebel 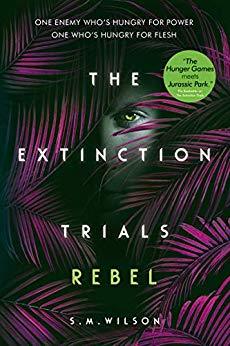 Storm and Lincoln’s city is burning. The people are starving. The only place left to run is Piloria, the continent of monsters. It’s up to Storm and Lincoln to keep their people alive as they colonize this lethal paradise. But will the biggest threat to their survival be the monsters in the jungle…or the ones inside the encampment with them?

This trilogy has been such an adventure, I’m really sad to see it end.

I’m always so surprised the length of these books. Somehow while I’m reading I feel like they must only be 200-250 pages, but they’re not. I just get so caught up in the action and the fast pace that I fly straight through them.

Rebel picks up the pacing that slowed down a little at the beginning of Exile and throws us right back into the action very quickly.

I really loved the angle Wilson took this time, instead of a mission to Piloria and back, this one is completely new. Sending ships from Earthasia to colonize the dinosaur continent sets up an entirely different set of challenges for the main characters. The dinosaurs are still exciting and dangerous, but now Storm has to step more into a leadership and mediator role. I’ve really grown to love Stormchaser as a character (despite my initial based entirely on the name) and the world Wilson has created in Piloria has fast become one of those ‘fictional worlds I want to visit’.

As I say, I’ve really enjoyed watching Storm, Lincoln and the gang setting up on Piloria over this trilogy and I really think it has the potential to become a larger series (along the lines of Terra Nova maybe?) and I know if it is I’ll definitely read those too. I’ve had so much fun with this trilogy, I definitely think I’ll read it again someday.

The Queens of Geekdom