For fans of: Less destructive Mothers of Dragons 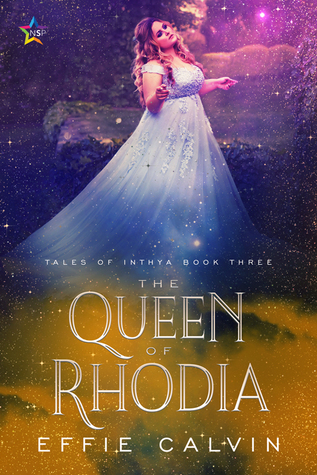 It has been sixteen months since Princess Esofi arrived in Ieflaria, and eight since her marriage to Crown Princess Adale. The princesses have a peaceful life together, preparing to become co-regents and raising their baby dragon, Carinth.

Their peace is shattered when Esofi’s mother, Queen Gaelle of Rhodia, arrives in Birsgen. She has heard about Carinth and believes that she deserves custody of him due to her greater devotion to Talcia, Goddess of Magic.

Adale and Esofi have no intention of giving up their son, but Gaelle is impossible to reason with—and there’s no telling what lengths she’ll go to in order to get what she wants.

The Queen of Rhodia takes the action back to the settings and characters from the first book, The Queen of Ieflaria, adds in the characters from Daughter of the Sun and send them off on a grand adventure to negotiate with dragons. In this instalment, Princess Esofi has to figure out which is scarier, the fire-breathing monsters or her visiting mother.

I really liked the way the characters developed in this one. Esofi and Adale’s relationship is lovely and seeing them as an established couple, raising their dragon son, was wonderful. I really liked that bringing Queen Gaelle over gave us an insight into Esofi’s childhood upbringing and really fleshed out her character. The two sets of protagonists were kept separate in the previous two books, so it was great to see them all come together in this instalment and see the way the different personalities and skill-sets played out.

I loved the development of the dragons in this book. In the first book, they were dangerous and animalistic until the very end but in this book, Calvin gives us a much closer look. The culture of the dragons is really rich and thought out, and I liked that she gave them a variety of personalities. Baby Carinth is absolutely adorable and I loved seeing him interact with everyone. I want to squeeze him!

The conflict between dragons and griffins, or the mysterious elven threat that keeps Rhodia busy, could have been delved into a little more but I’m hoping this series is going to continue for a good while so I’m happy to leave threads hanging. Having all these conflicts and complexities adds a wonderful depth and believability to the world-building.

My Review’s of the Previous Tales of Inthya books

Daughter of the Sun

5 thoughts on “ARC Review: The Queen of Rhodia”