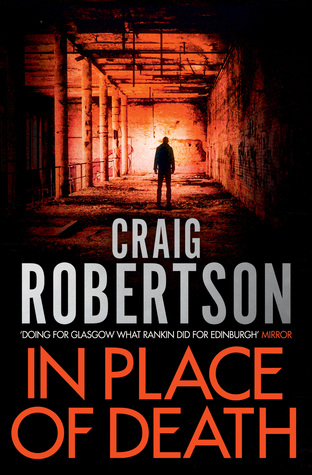 In Place of Death by Craig Robertson

She had interviewed too many distraught parents whose grown-up baby had done a disappearing act and had to tell far too many of them that there was nothing she could do. Not until their kid was harmed or broke the law. If they ended up living under an underpass or begging for change in London then there was a good chance they’d disappear forever.

A man enters the culverted remains of an ancient Glasgow stream. Deep below the city it is decaying and claustrophobic, and gets more so with every step. As the ceiling lowers to no more than a couple of feet above the ground, he finds his path blocked by another person. But the person is has been murdered.

DS Narey leads the investigation to find who the victim is and who killed him. Photographer Winter begins an investigation of his own, through the shadowy world of urbexers, people who pursue a dangerous and illegal hobby, a world that Winter knows more about than he lets on.

Meanwhile, DI Derek Addison is trying to prevent an escalating drugs war which has already left several casualties in its wake among the city’s rival gangs. A new face in town is upsetting the established order.

Against a backdrop of hauntingly atmospheric and dangerous buildings, the tangled links between the gangs and the urbexers who have strayed unwittingly into deadly territory draw all three investigations together.

10th – 16th – Do you have a favorite classic? When did you read it? High school or as an adult? (submitted by Elizabeth @ Silver’s Reviews)

I’ve always had a soft spot for Wuthering Heights. I had one of the (very, very) short, abridged version when I was little, even though I probably didn’t understand half of it. I guess that’s were my love of unlikeable characters comes from?

9 thoughts on “Friday Spotlight: In Place of Death”