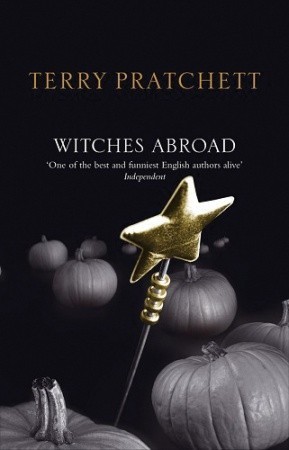 This is the Discworld, which travels through space on the back of four elephants which themselves stand on the shelf of Great A’Tin, the sky turtle.

After half an hour the boat drifted out through a cave mouth and into a narrow gorge between cliffs. Ice glistened on the walls, and there were drifts of snow on some of the outcrops.

Nanny Ogg looked around guilelessly, and then fumbled somewhere in the depths of her many skirts and produced a small bottle. There was a glugging noise.

Be careful what you wish for…

Once upon a time there was a fairy godmother named Desiderata who had a good heart, a wise head, and poor planning skills—which unforunately left the Princess Emberella in the care of her other (not quite so good and wise) godmother when DEATH came for Desiderata. So now it’s up to Magrat Garlick, Granny Weatherwax, and Nanny Ogg to hop on broomsticks and make for far-distant Genua to ensure the servant girl doesn’t marry the Prince.

But the road to Genua is bumpy, and along the way the trio of witches encounters the occasional vampire, werewolf, and falling house (well this is a fairy tale, after all). The trouble really begins once these reluctant foster-godmothers arrive in Genua and must outwit their power-hungry counterpart who’ll stop at nothing to achieve a proper “happy ending”—even if it means destroying a kingdom.

5th – 11th – If you could take the place of any fictional character, who would it be and why? (submitted by Charlotte @ InkBlottings)

We did this as a TTT topic a couple of weeks ago. I think I decided that in an ideal world, with no big bads, apocalypses or dark lord, I’d like to be a Hogwarts student or Camp Halfblood camper. As for a character whose life (as is) I would quite like, I’d pick Kath from The Haunted Yarn Shop Mystery series.