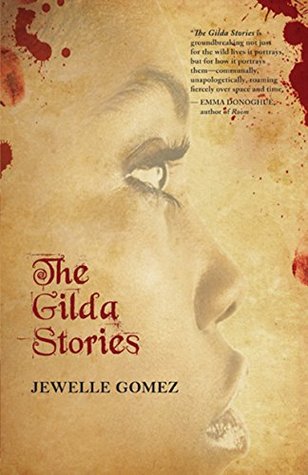 Before Buffy, before Twilight, before Octavia Butler’s Fledgling, there was The Gilda Stories, Jewelle Gomez’s sexy vampire novel.

“The Gilda Stories is groundbreaking not just for the wild lives it portrays, but for how it portrays them–communally, unapologetically, roaming fiercely over space and time.”–Emma Donoghue, author of Room

“Jewelle Gomez sees right into the heart. This is a book to give to those you want most to find their own strength.”—Dorothy Allison

This book was so much more amazing than I thought it would be! I mean, the premise of Black, lesbian vampire had me pretty convinced, but I wasn’t expecting just how impactful it would be.

The Gilda Stories starts with a young escaped slave in 1850 Louisiana. She quickly finds a new family, becomes a vampire and inherits the name Gilda. The rest of the story is told in leaps through the next 200 years —  1890, 1921, 1955, 1971, 1981, 2020 and 2050 — and in various cities including San Francisco, Missouri and Boston. This is completely fascinating as we see her go through different challenges, jobs and friendships. I loved that Gilda grows and changes gradually over the course of the story, which contrasts with the dramatic jumps in time. Gomez doesn’t feel the need to fill in every detail or every moment in between. It’s remarkable to see how things change between 1850 and 1955, or 1921 and 1971.

The cast of characters is wonderful. If you enjoy found families, you’ll love this. Even better, Gilda’s closest friends are all POC, queer or both. They’re all complex and full of personality. It’s amazing how much Gomez manages to imbue even in characters that only appear in one time-period, for only a few pages or lines. In both 1850 and 1955, Gilda’s closest friends are sex-workers and they’re treated with respect and understanding, as fully-fleshed out characters. Gilda herself is such a strong, complicated and fascinating character to follow.

Something really interesting about reading this now is seeing how close Gomez’s predictions have been. This was written in 1991, so the 2020 section was a far-off vision. It’s shockingly spot on: with overly invasive media, video-calls and the early signs of an impending environmental catastrophe. I’m not sure what that says for the post-apocalyptic version of 2050… but it’s certainly impressive.

I really loved The Gilda Stories — it pulled me right out of the reading slump I could feel coming — and, if vampires are set for a revival this year, I really hope it gets more attention again. I definitely recommend you give it a try.

1 thought on “Review: The Gilda Stories”