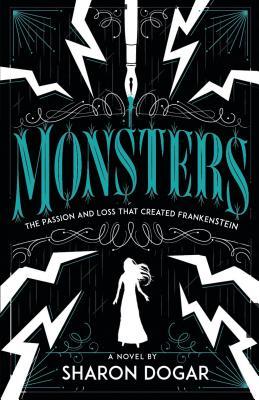 1814: Mary Godwin, the sixteen-year-old daughter of radical socialist and feminist writers, runs away with a dangerously charming young poet – Percy Bysshe Shelley. From there, the two young lovers travel a Europe in the throes of revolutionary change, through high and low society, tragedy and passion, where they will be drawn into the orbit of the mad and bad Lord Byron.
But Mary and Percy are not alone: they bring Jane, Mary’s young step-sister. And she knows the biggest secrets of them all . . .

The problem with historical fiction based so centrally on a real-life event or person is that the plot itself in unchangeable (although I hate to say predictable) and therefore the story must hang far more heavily on other aspects: such as characterisation, pacing and voice.

The characters initially felt a little flat to me, but within a few chapters Dogar seemed to find her footing and they really came to life. Mary and Jane’s (different but similar) insecurities over living in another’s shadow, whirlwind romances and jealousies are vivid and captured so that the reader can really feel both their pain and their joy. I thought that the author did a really good job of balancing her depictions of the sisters: neither is wholly right or wrong, and both are presented as complex individuals.

The pacing moves at a steady clip from (with plenty of time for philosophical musings) so that I never felt like there was any lagging. I think with this kind of almost-biography it’d be all too easy to get bogged down in timeframe and details, but Dogar knows what she’s doing here. She’s carefully chosen which elements to include and which to cut so that the plot seems uncluttered whilst still being fluid.

However, at times it felt the author was more interested in Mary’s mother (Mary Wollstonecraft, feminist philosopher) than Mary herself. And, to be fair, Wollstonecraft is an absolutely fascinating and remarkable woman, but I almost feel Dogar could have written a book about her instead. It feels a little too much like they wanted the feminist sensibilities of Wollstonecraft but the marketability of Shelley. Dogar clearly has a good knowledge and interest in the time and people involved, but sometimes to the degree that it impacts the story in a negative way. There were several points where interesting historical facts, famous name-drops or lines of quotations felt out of place either because of the character they came from or because the people referenced had little connection to what was actually happening in this specific story at that moment.

While Monsters wasn’t a perfect fit for me, it definitely had its strengths and I think readers looking for an introduction to Mary Shelly, or to enjoy it as a straightforward piece of historical fiction, will probably get a lot more out of it.