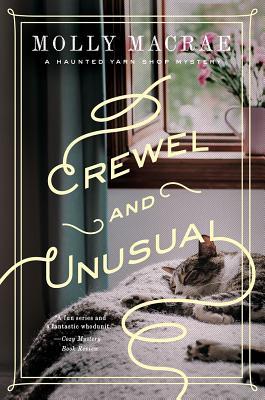 I was devastated when I reached the fifth and final book in the Haunted Yarn Shop Mystery series. It’s one of my all-time top (and absolute favourite mystery) series and the perfect cozy read.

However, great news! After a change of publisher, the series is back!

The sixth book Crewel and Unusual is another great instalment. It’s a perfect place to start the series if you haven’t read it before as MacRae make sure to catch you up with all the relevant details as we go. At the same time, for returning readers, it doesn’t feel like a huge infodump and smoothly continues the series along from the last book.

I loved the addition of the Vault arts-and-craft space to the little town of Blue Plum. It lets us meet a whole new set of town residents and sets the perfect scene for murder with plenty of suspects and motives.

As always with these books, I live for the characters.

Kath, Ardis and the whole crew of TGIF knitting sleuths are back and as charming as ever. I love the subtle romance between Kath and Joe, the comfortable, old-friends dynamic amongst the team and their animosity-turned-grudging-respect with Deputy Dunbar. I also really liked how crucial the shop’s resident ghost–Geneva–was to the plot this time around.

I absolutely loved Crewel and Unusual and it lived up to all my expectations.  This is a brilliant series to try if you like cozy mysteries and amateur sleuths –combining baking, crafts and just a touch of paranormal–and this instalment would be a good place for new readers to start.

I love this book, and the whole series. I really hope MacRae is able to carry on writing it for a very long time and I highly recommend picking it up.

Review by Any Good Book