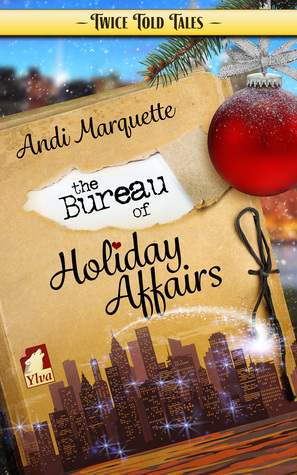 Executive Robin Preston has dedicated her life to climbing the corporate ladder, using whatever means necessary. In the shark-infested culture at Frost Enterprises, anything goes, and Robin is a master at the game.

On the verge of a major promotion, Robin receives a strange visit from Agent Elizabeth Tolson of the Bureau of Holiday Affairs, who informs Robin that, though Robin may be a lost cause, the Bureau has scheduled her for intervention. Robin will receive three visitors in the two weeks before Christmas, who will escort her on visits to her past, present, and future.

Robin will be forced to face not only who she’s become, but the parts of herself she left behind, when she was an art major in college and in love with fellow art student Jill Chen, in whom Robin found a kindred spirit—until Jill broke if off with her. In order for Robin to change her ways, she’ll need to reclaim who she was and open her heart again, to a past she thought she left behind.

The Bureau clearly has its work cut out for it, but Agent Tolson relishes a challenge, and she’s put together just the team for Robin’s case. They may have to cut a few corners and go outside a few lines, but Agent Tolson has a perfect salvage record and she’s not about to let that change. The question is, will Robin?

The Bureau of Holiday Affairs is a modern retelling of A Christmas Carol. Our Scrooge is Robin Preston. She’s in her thirties, single and has made her way up the corporate ladder by being — not to put too fine a point on it — a bit of a bitch.

More than that, she’s not really happy in herself: she’s lost touch with her brother, she kind of deeply dislikes the woman she’s sleeping with and she’s long ago given up on all her artistic dreams.

Christmas is here and it’s time for Robin to re-evaluate her life choices.

This story is a really cute, strong romance and I think that (along with Robin as a character) was it’s strongest feature. It’s a slow-burn, second chance romance — which always seems to be a popular trope but which doesn’t always work for me — that I really enjoyed. I liked that Marquette made both women imperfect and showed that they had each changed and grew into a place where a reconciliation made sense. I thought that the main love interest, Jill, had a particularly interesting backstory: her conservative, unsupportive family, a failed marriage, a tweenage daughter and a blossoming art career.

I also really like the hint’s we saw of Robin’s childhood and her relationship with her younger brother. The characters all felt well-written and well-rounded, and they behaved in believable ways — despite the nudgings from the “ghosts” their action never felt forced, but like decisions the characters themselves would have made.

A great take on a Christmas classic and a really strong, character-driven romance.

Side note: Although this is number three in the Twice-Told Tales series, the books in the series all appear to be completely unrelated except for the fact that they’re lesbian retellings. This is the first one I’ve read and it completely stands on its own.

4 thoughts on “Review: The Bureau of Holiday Affairs”