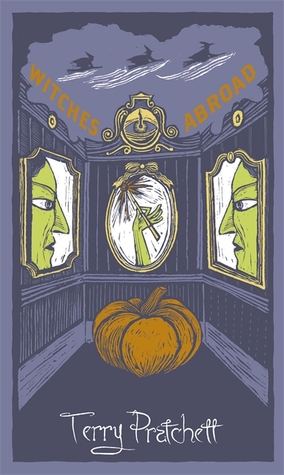 After half an hour the boat drifted out through a cave mouth and into a narrow gorge between cliffs. Ice glistened on the walls, and there were drifts of snow on some of the outcrops.

Nanny Ogg looked around guilelessly, and then fumbled somewhere in the depths of her many skirts and produced a small bottle. There was a glugging noise.

It seemed an easy job . . . After all, how difficult could it be to make sure that a servant girl doesn’t marry a prince?

But for the witches Granny Weatherwax, Nanny Ogg and Magrat Garlick, travelling to the distant city of Genua, things are never that simple . . .

Servant girls have to marry the prince. That’s what life is all about. You can’t fight a Happy Ending.