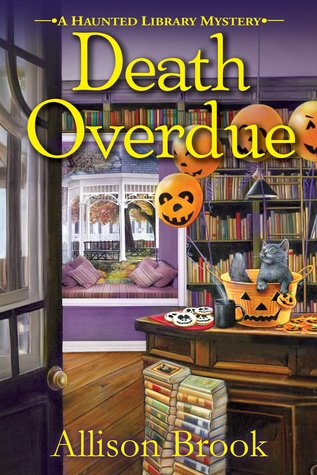 Carrie Singleton is just about done with Clover Ridge, Connecticut until she’s offered a job as the head of programs and events at the spooky local library, complete with its own librarian ghost. Her first major event is a program presented by a retired homicide detective, Al Buckley, who claims he knows who murdered Laura Foster, a much-loved part-time library aide who was bludgeoned to death fifteen years earlier. As he invites members of the audience to share stories about Laura, he suddenly keels over and dies.

The medical examiner reveals that poison is what did him in and Carrie feels responsible for having surged forward with the program despite pushback from her director. Driven by guilt, Carrie’s determined to discover who murdered the detective, convinced it’s the same man who killed Laura all those years ago. Luckily for Carrie, she has a friendly, knowledgeable ghost by her side. But as she questions the shadows surrounding Laura’s case, disturbing secrets come to light and with each step Carrie takes, she gets closer to ending up like Al.

Something about autumn always puts me in a mood to read cozy mysteries. I don’t read them for the rest of the year, so I can’t really say how well Death Overdue compares in general.

It was a fun story, set in a library at Halloween, so it was just the kind of thing I was in the mood for.

I thought the characters were interesting. I particularly liked Carrie’s aunt and uncle, who seemed very kind and supportive. The rest of the town was a bit more hit and miss. It makes for lots of suspects, but I don’t know if I’d want to stay in a small town with so many unlikeable people! The mystery aspect seemed well handled. There were a few possible suspects and red-herrings but nothing that made the reveal of the culprit feel like a cheat. The plot dragged a tad in a few places — Carrie spent far more time out eating dinner than she did sleuthing it seemed — but was relatively solid.

My biggest disappointment with Death Overdue is that it lacked the very things I had most expected and what drew me to this particular book amongst the sea of cozy mysteries out there. First, there’s pumpkins on the cover, front and centre. You’d imagine it revolves around the Halloween setting (or at least features heavily). But no. There is a costumed Halloween party at the library, but it’s a brief event, unrelated to the mystery and could have easily been any library event. It’s not even the only holiday period the book covers, this could just as easily have been pitched as a Thanksgiving book. Secondly, the series is titled: The Haunted Library Mysteries, and there was a distinct lack of haunting. The ghost librarian (whose name I’ve forgotten, sorry) shows up briefly and infrequently (and Carrie shows little real reaction to the ghosts-are-real-and-in-my-office thing). I’d have liked to see more of the ghost, or at the very least, have her appearance actually connect to the main plot in a more meaningful way. The entire mystery (and the subplots) could have been just as easily solved without her existence as a character. I feel a bit cheated by this.

The next book in the series is Christmas themed, so I might pick it up over the holidays if I’m especially in the mood (but there had better be more haunting involved). Otherwise, Death Overdue was interesting enough, but not particularly memorable.