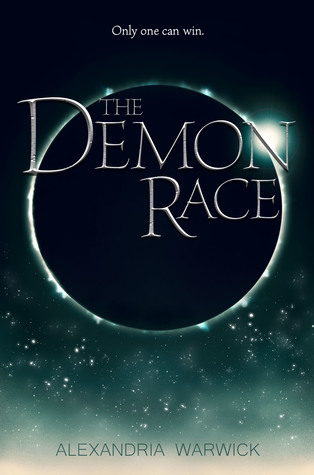 A race across the desert.

It occurs once every thousand years: the Demon Race. A test of will and strength, it is a race across the Saraj, a fight for the prize of a lifetime. And it is the key to Namali Hafshar’s freedom.

When shy, seventeen-year-old Namali learns of her arranged marriage, she flees home and enters the Demon Race for the chance to change her fate. But to compete, she must cross the Saraj on a daeva, a shadow demon that desires its own reward: to infect her soul with darkness.

Namali soon learns the desert holds more dangers than meets the eye. The only person she can trust is Sameen, a kind competitor seeking his own destiny. As her affection for him grows, however, so too does the darkness in her heart.

In this race of men and demons, only one can win. But the price of winning might be more than Namali is willing to pay.

I picked up The Demon Race towards the end of a long readathon. To make it worse, I’d let the e-arc languish on my Kindle for a good while and somehow — in the time between accepting it, and picking it up — I’d got it into my head that it was some kind of science fiction story. It’s not.

Of course, none of these are bad things, but it did mean The Demon Race had to work a little harder to win me over.

The Demon Race is set in a Middle Eastern inspired world, but creates its own mythology and history. I really loved the large-scale mythology of Good and Evil that sits inside the story: The Demon Lord, and his rivalry with his brother. I liked how this mythology and religion tied into the character arcs and influenced the ways in which Namali sees herself and moralizes over the choices she has to make in order to complete the race. On a smaller scale, I really like the daevas and the history and mystery around the race itself. I thought the setting was very well described: it was vivid and easy to imagine without becoming repetitive. The cultures were well thought out, and I really appreciated that as Namali and Sameen travelled across the desert, the towns that they encountered had varying and different cultural norms.

This is where The Demon Race really shines. I loved both the main character: Namali and Sameen. Sameen is an absolute cinnamon roll. I loved his strength, and his selflessness. I loved Namali’s self-doubt and her termination to prove herself. I thought she was really relatable as a teenage character. I loved the way both characters interacted together and the way they helped each other throughout their journey. I especially liked how Warwick wrapped up the relationship, picking a less obvious and more intriguing conclusion for the characters. I thought this was a great choice, as it added a realism to the story and pragmatism to the characters.

The Demon Race is a really strong story, especially for a debut novel. I did have a couple of issues with pacing, mostly in that we occasionally retread old ground and that there was perhaps a little too much self-reflection from Namali. But the strength of the characterization more than made up for this. The Demon Race is fast-paced and exciting. I didn’t want to put it down and I read through it in huge chunks. The characters were compelling, and will stay with really me.

Overall, it’s a good story that I thoroughly recommend.