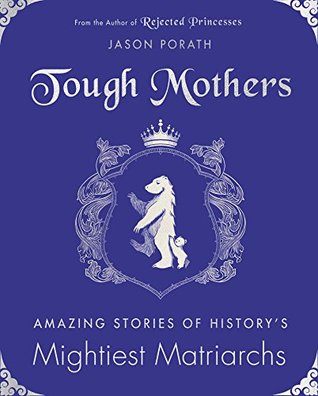 Mothers possess the “maternal instinct”—an innate fierceness that drives them to nurture, safeguard, fight, and sacrifice for the most important things that matter to them. For some mothers, it’s their children. For others, it’s artistic expression, invention, social cause, or even a nation that they helped to birth. In Tough Mothers, Jason Porath brings his wisdom and wit to bear on fifty fascinating matriarchs.

In concise, deeply researched vignettes, accompanied by charming illustrations, Porath illuminates these fearsome women, explores their lives, and pays tribute to their accomplishments. Here are famous women as well as lesser known figures from around the globe who have left their indelible mark as they changed the course of history, including:

The Mother Who Sued to Save Her Children from Slavery—Sojourner Truth, The Mother of Rock n’ Roll—Sister Rosetta Tharpe, The Mother of Holocaust Children—Irena Sendler, The Mothers of The Dominican Republic—The Mirabal Sisters, The Mother of Yemen’s Golden Age—Arwa al-Sulayhi

A celebration of motherhood and female achievement, Tough Mothers reminds us of the power of women to transform our lives and our world.

Technically, Tough Mothers is the sequel to Rejected Princesses but because they are both collections of mini-biographies they can be read independently. I bought both at the same time, but read this one first because it had fewer entries so was better for a readathon, but I’m definitely looking forward to reading another hundred in Rejected Princesses.

Tough Mothers contains fifty biographies, each between between 3 and 5 pages. I really like the selection of women that Porath included. They’re not necessarily all good people, or women who came out on top. He doesn’t shy away from the fact that these are real, and often complicated people. He also discuss the fact that history hasn’t been kind to some of these political leaders — that we shouldn’t ignore the role that misogyny and racism play in altering accounts and our perceptions of the past. He also gets the point across that strength comes in a variety of ways and that we can be impressed by what a woman has achieved without necessarily agree with either her motives or her methods. Every entry seems really well researched, and if any particular and take your interests, there’s a bibliography the back of book for you to do further research on your own.

Variety. There is a really good range of women cover in this book: a couple most people will have heard of, a couple that are more obscure, and some there are relatively unknown. The author has also been really good in covering a broad range of female experiences: political activists, fighter, queens and criminals etc. There is a wonderful, broad variety of social class, sexuality, ethnicity, religion and nationality.

Aethetics. The illustrations are gorgeous: Porath used to work at Dreamworks. There’s a little section at the end of most entries describing why certain items or clothes have been included, and explaining lighting/ colouring choices. This was interesting, and adds an extra angle to the histories.

Categorised. The maturity rating system means that the book can be read by all ages: younger readers can easily avoid higher rated entries. There are also specific content warnings, such as rape, child abuse etc. This lets readers with specific potential triggers skip past individual biographies so they don’t have to miss out on the rest of the book.

If you’re interested getting a taste of Tough Mothers/ Rejected Princesses, you can look up the website here. It has a selection of entries from both books and a bunch of web exclusives. It’ll show you the type of illustrations, content ratings and sense of humour in the books and can be searched by name or interactive world map.