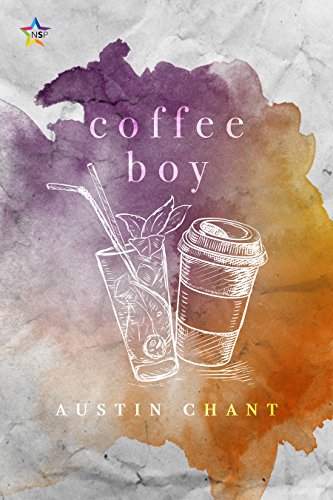 Coffee Boy is one of those books that seems to constantly come up in discussion and recommendation threads. It’s been on my TBR forever, and although I adored the other Austin Chant book I read, Peter Darling, somehow I’ve just never gotten around to reading Coffee Boy. Thankfully, one of the prompts in this month’s Biannual Bibliothon was to Read a book that’s been on your TBR for more than a year. Since Coffee Boy definitely fits that bill, I picked it up and I’m really glad I did.

Coffee Boy is short, you can probably get in one sitting. I did. It was the perfect antidote to all the fantasy and sci-fi books I’ve been reading lately. It’s a very sweet contemporary centred around Kieran, his internship at a political office, and the crush he’s developing on his supervisor.

Coffee Boy managers to balance a sweet, fluffy romance without glossing over the difficulties Kieran faces being trans. For those who might need the warnings, there’s no outright transphobia or homophobia in this book — it’s subtle, everyday things such as his colleagues accidentally but consistently misgendering him, having to present as female at his day job, and generally feeling like he’s struggling to find his place in the world.

I loved Kieran as a character. He’s outspoken and snarky, and steps over the politeness line more than once. He’s layered, confident is some ways and painfully insecure in others. The love interest, Seth, completely has that you-think-he’s-an-asshole-but-he’s-incredibly-insecure trope which I’m a total sucker for. The amount of characterisation and relatability Chant manages in a short novella is stunning. There’s a little bit of angst, just enough to balance out the the very sweet and predictable-in-a-good-way romance (the kind you’re rooting for from the start).

My one recommendation if you’re going to read this, is definitely pick yourself up some snacks before you start because there’s some delicious and tempting (and wonderfully written) descriptions of peppermint lattes, fruity cocktails and Korean barbecue.

Coffee Boy will leave a smile on your face.