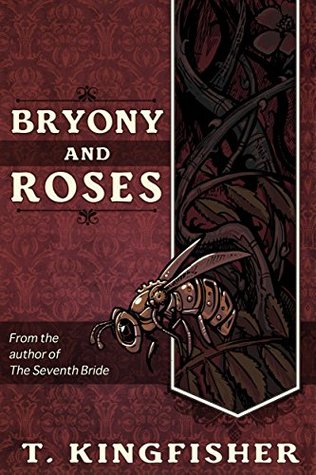 Bryony and her sisters have come down in the world. Their merchant father died trying to reclaim his fortune and left them to eke out a living in a village far from their home in the city.

But when Bryony is caught in a snowstorm and takes refuge in an abandoned manor, she stumbles into a house full of dark enchantments. Is the Beast that lives there her captor, or a fellow prisoner? Is the house her enemy or her ally? And why are roses blooming out of season in the courtyard?

Armed only with gardening shears and her wits, Bryony must untangle the secrets of the house before she—or the Beast—are swallowed by them.

Beauty and the Beast is my favourite fairy tale. But I’ll admit that in the past five years or so, there have been so many retellings that I’m kind of tapped out. I picked up Bryony and Roses because I read T. Kingfisher’s Snow Queen retelling, The Raven and the Reindeer just a few days ago and really enjoyed her writing. You can check it my review here.

Bryony and Roses didn’t let me down.

I really really loved this retelling of the story. It sticks more closely to the original de Villeneuve version than a lot of the new releases which are, understandably, trying to put their own stamp on it. However, I really liked that Bryony and Roses kept a lot of things from the original that I really enjoy; things fall by the wayside in a lot of other retelling. I loved that the Beast proposed and was rejected every night, I loved the invisible servant/magical house aspect, and I loved that the Beast only looks like a monster but he’s actually a perfect gentleman at the entire time.

Where Kingfisher diverged from the original tale was to give Bryony a lot more depth than she sometimes has. She’s given a lot more personality — Bryony isn’t just the brave, kind daughter of a down-on-his-luck merchant — she’s also an avid gardener, a lover of bad poetry, and prone to a few social faux pas. She gets a lot more agency than in the original story — there’s a mystery to be solved in this after all — without quite falling into the badass, fighter heroine trope. Beast gets a similar treatment. He’s a gentleman scholar, who has a workshop, making mechanical insects for Bryony’s garden with specialised tools to accommodate his indelicate paws.

In her introduction and acknowledgements, Kingfisher mentions that she was heavily inspired by Robin McKinley’s Rose Daughter. I haven’t read Rose Daughter in probably ten years, but I do remember really loving it. It was probably my first introduction to fairytale retellings and it’s a complete classic. Kingfisher’s story definitely reminds me of Rose Daughter. It has that low-key, meandering enchantment to it. Although, I think Kingfisher’s writing is a little less verbose and prose-heavily than McKinley’s — that may sway you one or the other.

I loved the ending but I’m not going to give it away. Bryony and Roses is definitely one of the more enjoyable Beauty and the Beast retellings I’ve read recently.