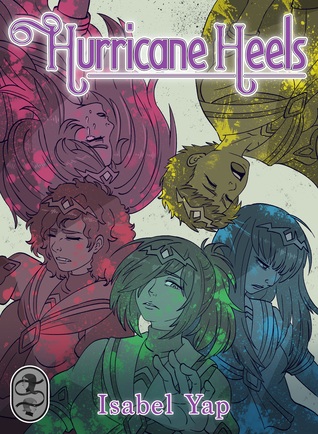 When Alex, Ria, Aiko, Natalie and Selena met at summer camp, they never expected the goddess would ask for their help, enlisting them as soldiers to protect the world from the forces of darkness. Gifting them each with a different object of power—a bracelet, a ring, a watch, earrings, a necklace—the goddess’s grace grants the friends the weapons to fight, the ability to heal, and the magic to strike back against the Grey.

Now, over a decade later, the five best friends are still fighting. But the burden of secrecy, the inevitability of pain, and the magnitude of their responsibility to keep saving the world has left them questioning their goddess.

How much longer can they keep saving the world? Can their friendship survive if one of them leaves their fold? And can they keep it together just long enough to get through Selena’s wedding?

Hurricane Heels is a collection of five interconnected short stories. Together, they tell the formation of a group of five ‘magical girls’ (Sailor Moon, Puella Magi Madoka Magica etc.) and their lives now they’ve reached their mid-20s and one of them is getting married.

It was really fun and interesting to read about this kind of character years after we would usually be with them. We do see how they get their powers through flashbacks, but there’s much more emphasis on the girls reflecting and their thoughts on the downsides of their powers. The girls wonder about whether they each have too much power for one person and the responsibility this forces upon them. They worry about having to watch their friends and/or innocent bystanders be injured. They feel lonely and they wonder if this is what will happen for the rest of their lives. It’s very much a quarter-life crisis — the kind of things people worry about in their mid-twenties like careers, college and familial obligations — rather than teen anxieties around hormones and school — but there’s also some cool monsters and badass weapons, such as magical swords and chainsaws.

Each short story is told by a different girl, and although I enjoyed them — and thought it was great that there was a good variety of representation — I didn’t think that the voices were particularly distinct, and that something that made it a little difficult to connect to the characters. There is a lot of heart to the story, and a really great dedication between the five girls, but occasionally the battle scenes felt a little jumbled, and the flashbacks could be a little confusing.

I would love, love to see Hurricane Heels adapted as a graphic novel. I definitely recommend it for anyone that’s a fan of magical girl anime or manga, or anyone who’s a little older but still interested in this type of story, as they’ll probably see a lot of themselves represented in these characters.