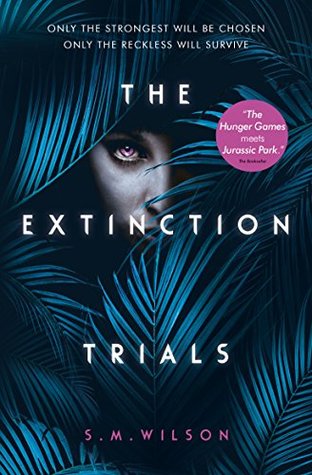 In Stormchaser and Lincoln’s ruined world, the only way to survive is to risk everything. To face a contest more dangerous than anyone can imagine. And they will do anything to win.

But in a land full of monsters – human and reptilian – they can’t afford to trust anyone. Perhaps not even each other…

The Extinction Trials is pretty much Jurassic Park meets The Hunger Games meets Journey to the Centre of the Earth. It’s an action-packed, fast-paced adventure, and a whole lot of fun. I got through this book in one sitting. The plot moves quickly, taking us from the overpopulated continent of Earthasia, through the various candidate trials (from rock climbing to diving), and then across the ocean to Piloria where try and steal various dinosaurs’ eggs.

The world building in The Extinction Trials is wonderful. There are two distinct worlds: the overpopulated, grey, dystopian world the protagonists begin in, and the lush, dangerous island which they travel to. I could so clearly see both of them. I could feel the suffocating oppression in Eurasia and wanted to reach out and touch the foliage in Piloria.

Stormchaser is a wonderful main character (despite her ridiculous name). She is brave and compassionate. She wrestles with the moral implications of helping to create a virus to wipe out the dinosaurs in a way that none others seem to. But she still manages to be sneaky and strategic, especially at the end.

Although for the most part, this book is simply good fun, it also does make some interesting points about the overuse of resources and presents the moral dilemma of whether it’s better to save an individual from illness, a larger group of from hunger, or an entire non-human species from eradication.

The Extinction Trials was just so much damn fun! It’s a really really enjoyable book — it would make an amazing movie or tv series — and I’m looking forward to picking up the sequel, Exile, which luckily enough for me, is already out.

4 thoughts on “Review: The Extinction Trials”