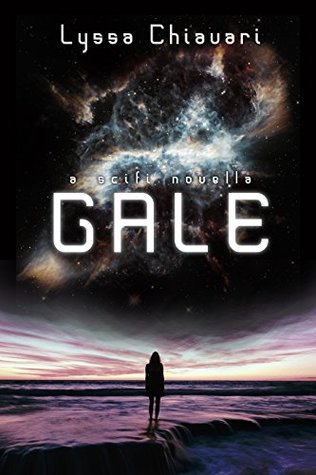 Miranda doesn’t want to be different. On Gale, being different can get you killed. When her seizures began, Miranda tried to keep her abnormality secret. But then the visions started—ominous hallucinations of strange lights in the sky, an otherworldly monster with wings like a dragon, and a girl who appeared from the clouds like a bolt of lightning. Despite the ever-present threat of the Watch, Miranda is determined to find out what the visions mean. Little does she know that the answers might lead her to freedom…

Gale is the first time I’ve seen a retelling of The Tempest. I have to say here — I’ve never read/seen The Tempest, so I can’t say how well Chiavari kept the spirit, characterisation etc of the original. What I can say, however, is that in a very limited page count, she manages to tell a complete and convincing story which didn’t rely on the reader having any knowledge of the original. Which I think is equally important for a retelling.

The world-building is well done and the dystopian world of Gale feels appropriately tense and claustrophobic as you’re reading. The politics and conspiracy plotline is all kept very mysterious, in a way that makes the reader understand Miranda’s confusion and frustration but which all came together in the end. I really liked Miranda as a protagonist — the decisions she made always seemed to make sense for the situation she was in. I also really liked her relationships with her brave friend Ari and (future) romantic interest Ferda.

An interesting and original story you can probably read in one sitting.