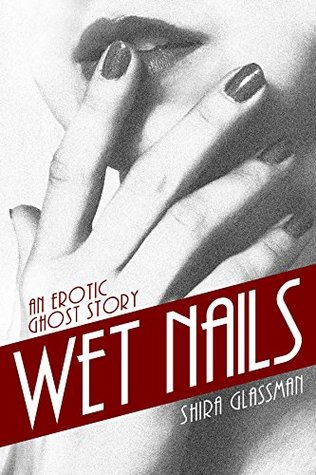 Lonely grad student Adina Greenberg is in for a treat when the glamorous ghost of Rose Hamilton, her favorite 1950s Hollywood actress, comes out of the television to give her a manicure and great sex. This story explores contrasting versions of bisexuality: Adina’s open preference for women vs. the closets and dangers of Rose’s era.

Okay first, not really part of the review, but — I did not know there was a name for the nervously-picking-at-the-skin-around-your-nails thing! I do that! And I thought it was just a weird habit that meant I left awkward dates hiding the blood running down my hand. But, no — the main character here has dermatillomania, which I never knew was a thing. So cool to know.

Anyway, this is another adorable sweet short (very, very short) story from Shira Glassman. Don’t ask me how she’s managed to make an erotica sweet, but she has. That the characters are totally believable — yes, even the ghostly Rose — in such a brief word count is really impressive. And it was wonderful to see a nerdy, female STEM student who is adorable, with a bit of a feminine side rather than the extremes of either the robotic or the sex-crazed stereotypes (I’m looking at you, Big Bang Theory). On top of all that, there’s a little bit of talk about the Golden Age of Hollywood and attitudes to race and sexuality at the time.

I just wish it had been a bit longer and shown us what happens next. Does Rose come back? Do they start a funny Being Human-type friendship or romance? Does Adina get together with (very briefly mentioned) fellow student, Steph?