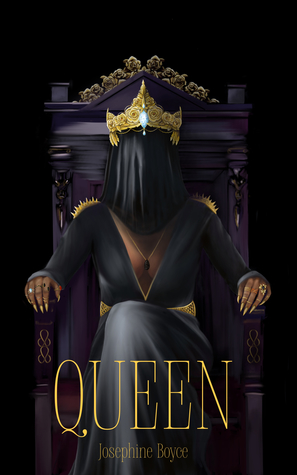 Once upon a time there was an evil Queen. She ruled her land with an iron fist and one day a hero and his two friends journeyed to defeat her and take back their country from her tyranny.

This is her story.

I’m sort of in two minds about Queen, and I want to preface this by pointing out that this is a novella with glowing reviews on Goodreads. The premise is basically the story of heroes trying to overthrow an evil queen but from the queen’s (who’s not evil, just manipulative and determined) point of view.

Awesome, huh? I love the premise. And Amarea is a great character because she’s utterly ruthless, and although sometimes her actions are questionable or extreme, you can totally see her logic in her actions to defend her people. The world-building was the greatest strength of this story, I thought. The government and society have been brilliantly planned out. There’s not just the church versus the government, but two warring factions within the church (worshipping two different but connected gods), the greedy nobility and a put-upon proletariat ready to riot. We briefly see Amarea dealing with all these things as well as ambassadors from nearby territories. I could easily see this being fleshed out a little into a full-length novel.

I also liked a little technique the author used — giving us just a sentence or two from the “hero’s” pov at the start of each chapter to show how Amarea’s reputation is building.

On the negative side, I thought the pacing was a little off. The first half of the story drags in places and suffers quite a bit from telling-not-showing. Everything picks up but the dramatic (and, boy, is it ever!) ending feels really crammed in and could have used a little room to breathe.

Now, my thoughts are messy here. My biggest issue is with Amarea. I know, I said I thought she was a brilliant character — and I do! But I can explain. I have two issues. The first was pretty minor — her face is so beautiful that anyone who sees it is bewitched. There’s a lot of harping on about this and it trite and Oh noes, I’m just soooo beautiful. I’d let that slide though. The second ties into that, and it’s that Amarea uses her beauty to essentially force people to desire her to the point they’ll do anything she asks. This made the sex feel awfully cohersed, to the point of rape. It doesn’t help that Amarea is bisexual. I really don’t think we need yet another portrayal of bisexual women as maniplutaive, or of using sexuality to ‘trick’ people. There’s also slut-shaming, including the line — They say the Queen whores herself to man or woman — I’m really not keen on the bisexual characters most noted quality (mentioned even by the love interest) being that she’s promiscuous, or rather, that this is painted so negatively.