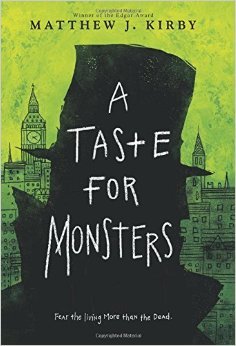 It’s London 1888, and Jack the Ripper is terrorizing the people of the city. Evelyn, a young woman disfigured by her dangerous work in a matchstick factory, who has nowhere to go, does not know what to make of her new position as a maid to the Elephant Man in the London Hospital. Evelyn wants to be locked away from the world, like he is, shut in from the filth and dangers of the streets. But in Joseph Merrick, the Elephant Man, she finds a gentle kindred who does not recoil from her and who understands her pain.

When the murders begin, however, Joseph and Evelyn are haunted nightly by the ghosts of the Ripper’s dead, setting Evelyn on a path to facing her fears and uncovering humanity’s worst nightmares.

This was a total surprise favourite for me — Jack the Ripper’s been done in a lot of things, and the cover’s a little meh.

But the main characters? Are awesome.

Our protagonist, Evelyn, manages to be both extremely smart, bold and brave, and painfully guarded and insecure. I liked that her issues over her appearance weren’t brushed away easily, and that there were no magical medical solutions. I wasn’t sure how I’d like having a real-life person in fiction but Joseph Merrick (the Elephant Man) was a well-rounded and sympathetic character. I really grew attached to these two. There were a few other less likable characters, but these felt intentional and gave Evelyn a chance to show different sides to her character.

I really liked Kirby’s writing style which was sharp but elegantly in-keeping with the time period. It’s the first of his books I’ve read, but I’d be interested to see if the writing style carries across to his fantasy books. There are lots of historical nods and tidbits woven throughout which really give the atmosphere of Victorian London.

I know this will be unpopular, but I actually preferred this to Stalking Jack the Ripper — although that was fab too — so if you liked that one, you should give A Taste for Monsters a try. I liked that in this story there was less of a focus on solving the mystery of who the ripper was (although that plays a part) and more on investigating the victims and the society in which the murders happens. This made A Taste for Monsters a bit different to the other Jack the Ripper films, tv shows and books out there.

2 thoughts on “REVIEW: A TASTE FOR MONSTERS”