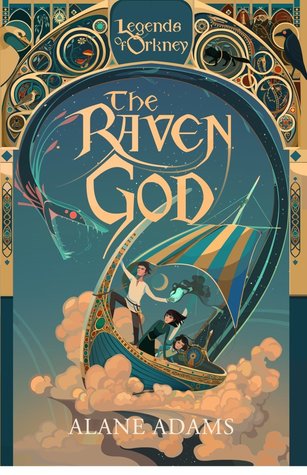 After defeating the Volgrim witches, life in Orkney is quiet. Too quiet. Before Sam Baron can catch his breath, an army of fire giants led by Surt gather in the Eighth Realm of Musspell, determined to destroy Orkney–and it’s all Sam’s fault. After all, he took Odin’s life with an ancient cursed dagger, and now, mankind has lost its protector. To make matters worse, the God of Mischief, Loki, is on the loose and determined to reunite with his evil wife, Angerboda, and their three children: Fenrir the wolf, Jormungand the sea serpent, and Helva, Goddess of Death. Orkney’s only hope lies with Sam and his stalwart friends. As Surt prepares to launch his forces against Orkney, Sam and two of his fellow witches, Perrin and Mavery, set out on a journey to rescue Odin, aided by Skidbladnir, a magical ship of the gods that can fly over land and sea, and Geela, a Valkyrie who can transform into a battle-ready goose. Meanwhile, Leo and Keely travel north to stop Loki from starting a war between the Eifalians and the Vanir, while Howie is left to watch over Skara Brae. With time running out, our heroes try frantically to prove once again that they can find the courage to do what’s needed when the odds are stacked against them–even when the sacrifice asked is greater than any of them could imagine.

Important note: The Raven God is the third in the Legends of Orkney series. I didn’t know this when I requested this arc, I went purely on the gorgeous cover. As such, I feel I didn’t get the full experience and my rating should be taken with that in consideration.

The Raven God was a fast-paced story and full of action. I can definitely see the comparison to the earlier Percy Jackson books. The protagonist, Sam, is not quite as charming as Percy, but he’s been through a tough time in the previous book and trying to set right his mistakes. To me, he sometimes came across as a little too blasé about how his actions would affect everyone else or spent a little long in self-pity, but all of that might be affected by my not having read previous instalments.

There’s a lot going on in this book — a lot of action and quests for both Sam and the side characters. And there’s a lot of side characters and factions in conflict with one another. This makes sense for a finale but I really struggled to get to grips with who everyone was. Few of the characters personalities really stood out to me as being particularly memorable, but again, this is might have been better if I’d read the earlier books.

In short, The Raven God is a fun, action-packed middle-grade fantasy. I liked the use of mythology (even if accuracy was a little hit-and-miss in places) and the world felt deep and well-developed. The number of characters became a little overwhelming at times, so I think this would be best read as part of the series, as intended, it’s not a standalone.