It’s the start of Jordan Sun’s junior year at the Kensington-Blaine Boarding School for the Performing Arts. Unfortunately, she’s an Alto 2, which—in the musical theatre world—is sort of like being a vulture in the wild: She has a spot in the ecosystem, but nobody’s falling over themselves to express their appreciation. So it’s no surprise when she gets shut out of the fall musical for the third year straight.

Then the school gets a mass email: A spot has opened up in the Sharpshooters, Kensington’s elite a cappella octet. Worshiped … revered … all male. Desperate to prove herself, Jordan auditions in her most convincing drag, and it turns out that Jordan Sun, Tenor 1, is exactly what the Sharps are looking for.

Guh! I freakin’ love this book! First, I have to say upfront that I know less than nothing about acapella group and I have no musical talent or real interest. None of that affected my enjoyment of Noteworthy in the least.

I loved whole Sharpshooter gang sensible Mama, quirky Issac, focused Trav and sensitive Nihal being my personal favourites. And of course, there’s Jordan (or her alias Julian). Jordan’s a wonderful, relatable and likeable protagonist. She’s trying her best, against stacked odds, and it’s not that she’s not good, it’s just that her fellow students are better. So, she comes up with a scheme that sounds ridiculous but makes more sense the more she thinks about it. And why not? I completely followed the character’s logic and it didn’t seem at all unbelievable that she pulled the deception off for as long as she did. As I said, I’m not musically/ theatrically talented and theatre school would be my nightmare, but I definitely saw myself in parts of Jordon, and I think most readers will in one way or another. 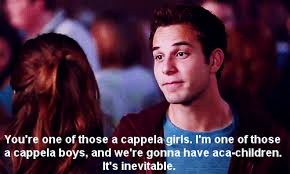 The plot itself if pretty simple, but there were some lovely moments along the way. I loved the Sharpshooters secret hideout and the not-quite initiation. I loved the group’s holiday retreat and the bitching over each other’s driving, political interest or awful flirting techniques. I loved the escalating prank war with the rival all-male group. My only issue was that the sing competition itself and the outcome is a bit of a given, and the very last few chapters lacked a bit of punch. Otherwise, the plot moves quickly, providing a framework for the characters to shine upon.

Sweet without being saccharine, and relatable even when I had no idea what musical technique they were taking about.