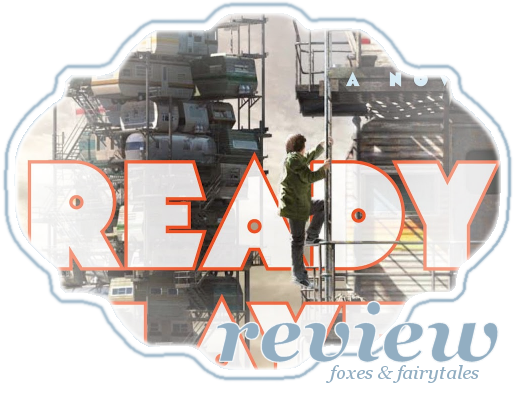 In the year 2044, reality is an ugly place. The only time teenage Wade Watts really feels alive is when he’s jacked into the virtual utopia known as the  OASIS. Wade’s devoted his life to studying the puzzles hidden within this world’s digital confines, puzzles that are based on their creator’s obsession with the pop culture of decades past and that promise massive power and fortune to whoever can unlock them. When Wade stumbles upon the first clue, he finds himself beset by players willing to kill to take this ultimate prize. The race is on, and if Wade’s going to survive, he’ll have to win—and confront the real world he’s always been so desperate to escape.

I don’t really read many dystopian novels but I freakin’ loved this!  Up front I want to point out that while I’m a massive nerd and loved all the references to movies etc., I’m definitely not a gamer. I don’t think you need to get all the references to enjoy the story. When something matters to the plot it’s described so that you can understand it in context.

The world-building is crazily awesome. The ‘real’ world is a scarily believable future, where big business ruthlessly stomps on everyone and  the energy and poverty crisis’ have driven people to hide inside a massive virtual reality programme. The OASIS is an amazing and complex world with so many cool possibilities – I love the idea of playing about in the Firefly, Star Trek or Discworld universes – but even the relativity basic Ludus, where Wade goes to school, runs a fascinating education system.

I loved all of the characters especially Wade and his friends. It’s great how different they all are – they each have different reasons for wanting to win the quest. The villain, rival company technology IOI, are chillingly ruthless – especially Sorrento, who’s willing to do anything including kidnap, blackmail and murder. I also like the less mustachio-twirling aspects of IOI’s villainy – the debt collection team and the indentured servitude programme.

Overall, the plot has a feel to it that’s a mixture of treasure hunt, epic quest and friendship tale. My only gripe (and it’s a teeny one) is that occasionally the lists of games, authors etc can be a little excessive but I’d still give this book 5 stars easily.

2 thoughts on “Review: Ready Player One”

"The pacing is slow and drawn-out (so something to watch out for if that’s not your thing) which gradually builds up all the simmering tension that’s brewing just under the surface." Check out my review of #TheAnimalsAtLockwoodManor over on my blog. ❤
#FFFebruaryReads prompt: Favourite FF. I love the whole Tales of Inthya series. Each one stands alone but together they cover different countries and various FF relationships. Plus, there's dragons, gods, arranged marriages, chaos demons and kittens.
What are your favourite colours? That Inevitable Victorian Thing is last book I'll be starting for #FFFeb. I love this cover so much! The color combination might be my very favourite? Purple, teal and gold.
#FFFebruaryReads prompt: Science Fiction or Fantasy. This was a fun story I read last December. It's a modern day A Christmas Carol retelling with a second chance romance.
Thank you so much Jade at @_zephyrbooks and @headofzeus for going to such a special effort to find me a copy of #DangerousRemedy 🖤 Pitched as having a French Revolution backdrop, a queer romance and Frankenstein vibes, I'm absolutely stoked to pick this one up.
I got some wonderful book mail today courtesy of @LivvyLouL. I'm so excited to read this "alternative history fairy-tale" 🧡🧡🧡